The northern lights are a breathtaking sight. They dance through dark skies near the North Pole, permeating stories, myths, legends and art. Here in Canada, we’re lucky enough to have some of the best views in the world.

The aurora borealis can spring upon communities at seemingly random times. Even so, there are a plethora of resources monitoring and predicting geomagnetic storms, helping you plan when to catch a glimpse and capture a photograph.

A great Canadian resource for aurora watchers is Natural Resources Canada’s Space Weather regional forecast page. Select your region and you’ll find a bar-graph displaying the current level of activity and forecasts covering the next three and six hours. 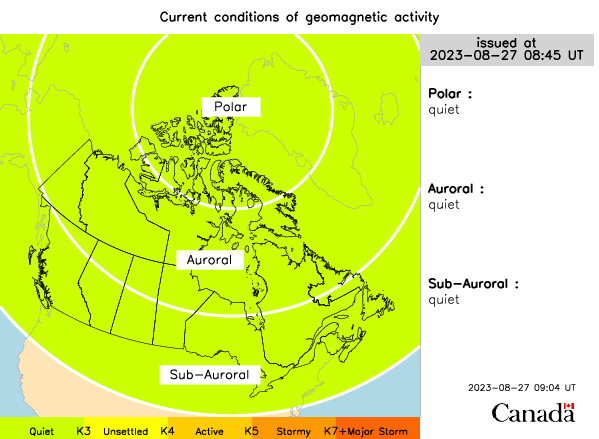 For those of you who really can’t get enough of the northern lights, delve deeper into how Canada predicts space weather with this thorough guide from NRC.

Another excellent resource is the Space Weather Prediction Center at the United States National Oceanic and Atmospheric Administration (NOAA), which offers a 30-minute forecast of auroral activity and intensity for the Northern and Southern hemispheres. This tool illustrates the current position and extent of the auroral oval — a more or less permanent feature centred over our planet’s magnetic poles.

The strength of the aurora is indicated by the colours shown in the scale on the bottom of each map, with red indicating most intense conditions and dark green being the least. Generally, if red appears over your geographic location, there’s a good chance you’ll see some auroral activity if your skies are dark and clear.

Today’s digital cameras make capturing the aurora easy. In particular, if you own a DSLR (a digital single-lens reflex) camera, you can clearly catch subtle auroral curtains that are barely perceptible to human vision.

Use your widest-angle lens at its lowest f-stop (typically between f/2.8 and f/3.5), and set the ISO to 800 or 1600 and the exposure to between 10 and 25 seconds. You’ll need a camera tripod to keep the camera steady during the exposure and a location away from light pollution. Yes, the last factor — escaping light pollution — is often the hardest one. But a fine aurora portrait is easier to capture than ever before.

Non-DSLR cameras, usually called compact digital cameras, are less capable of taking aurora shots, but are worth trying if tripod-mounted. Check the user’s guidebook to see whether you can set the compact camera to a manual mode that allows up to a 15-second exposure around f/3.5, a setting that should record an aurora.

Good luck — and if you manage to get a nice photo, please send it to us so we can share it with our readers.

For those in Alberta, AuroraWatch.ca and its email alert system is another great resource. The website provides a real-time monitor of geomagnetic activity in the Edmonton area. They also have a free email alert service alerting members when aurora may be visible.

Space Weather Canada often tweets when Canada is in for some major geomagnetic activity. See their latest posts below.

Will you see the northern lights tonight? Find out using these tips and tools.

On the night of May 27-28 observers got to see a rare display of northern lights.

A great northern lights show on June 22 was triggered by an intense solar storm.