As you read this, the James Webb Space Telescope, one of the most ambitious and expensive telescopes ever conceived, is poised to launch. Astronomers have been waiting patiently for this moment for years — in some cases, decades — and will be watching with bated breath as Webb is hurled into space atop an Ariane 5 rocket from the Guiana Space Centre in South America.

Nathalie Ouellette, an astronomer at the Institute for Research on Exoplanets at the Université de Montréal, said she’ll be feeling “a mix of anxiety and excitement” on the big day. “I have every confidence that the engineering and launch teams will have done their jobs, but it’s just human nature to worry.”

Webb will dwarf its predecessor: Spitzer’s main mirror was just 85 centimetres across, while Webb will employ an array of 18 small hexagonal mirrors functioning like a single mirror 6.5 metres across.

What sets Webb apart from previous telescopes will be its remote location. While Hubble circles the Earth some 500 kilometres up, Webb will be working from the second Lagrange point, L2, located 1.5 million kilometres out in space. (To picture where this is, imagine drawing a line from the Sun to the Earth and keep going for another million miles.) The location was chosen for its gravitational stability and for its coldness; shielded from heat emitted by the Earth and the Sun, and far removed from both, Webb’s sensors will reach into the depths of space, likely shedding new light on everything from ancient galaxies at the edge of the visible Universe to stellar nurseries where new solar systems are taking shape. “James Webb will be able to look farther back in the history of the Universe than ever before,” Ouellette said.

How the Universe
was built

In this image, there are 7,500 galaxies stretching back through most of the Universe’s history. The farthest visible, a few of the very faint red specks, are seen as they appeared more than 13 billion years ago, or roughly 650 million years after the Big Bang. This image was taken with the Hubble Space Telescope; the James Webb Space Telescope is expected to see even farther.

Because the Universe is expanding, light from distant galaxies is stretched out, shifting it toward the red end of the spectrum and even into the infrared — making it ripe for detection by Webb. Astronomers believe the telescope will give them their best view yet of these ancient “high redshift” galaxies.

While the Hubble allowed astronomers to observe galaxies that formed about 500 million years after the Big Bang, Ouellette said Webb will push that figure back to 200 million years. Data from the new telescope should also shed light on the formation of the first structures in the Universe, helping researchers understand not only the evolution of galaxies but of the stars within them.

“It’s not totally clear how the first structures formed,” Ouellette said. “It could have been a top-down mechanism, where you had large structures collapsing down, and stars condensed from within those structures — or if it was a bottom-up formation, where little stars formed first and then congregated together to form galaxies. So it’s still a bit of a mystery how structure was formed at the very start.”

In fact, the telescope should reveal galaxies “at a whole range of redshifts — or, equivalently, times in the Universe’s history — from very early times to halfway up to the present day,” says Chris Willott, an astronomer at the Canadian Astronomy Data Centre in Victoria, British Columbia. This will let astronomers “trace the evolution of these galaxies and see how they’ve changed.” 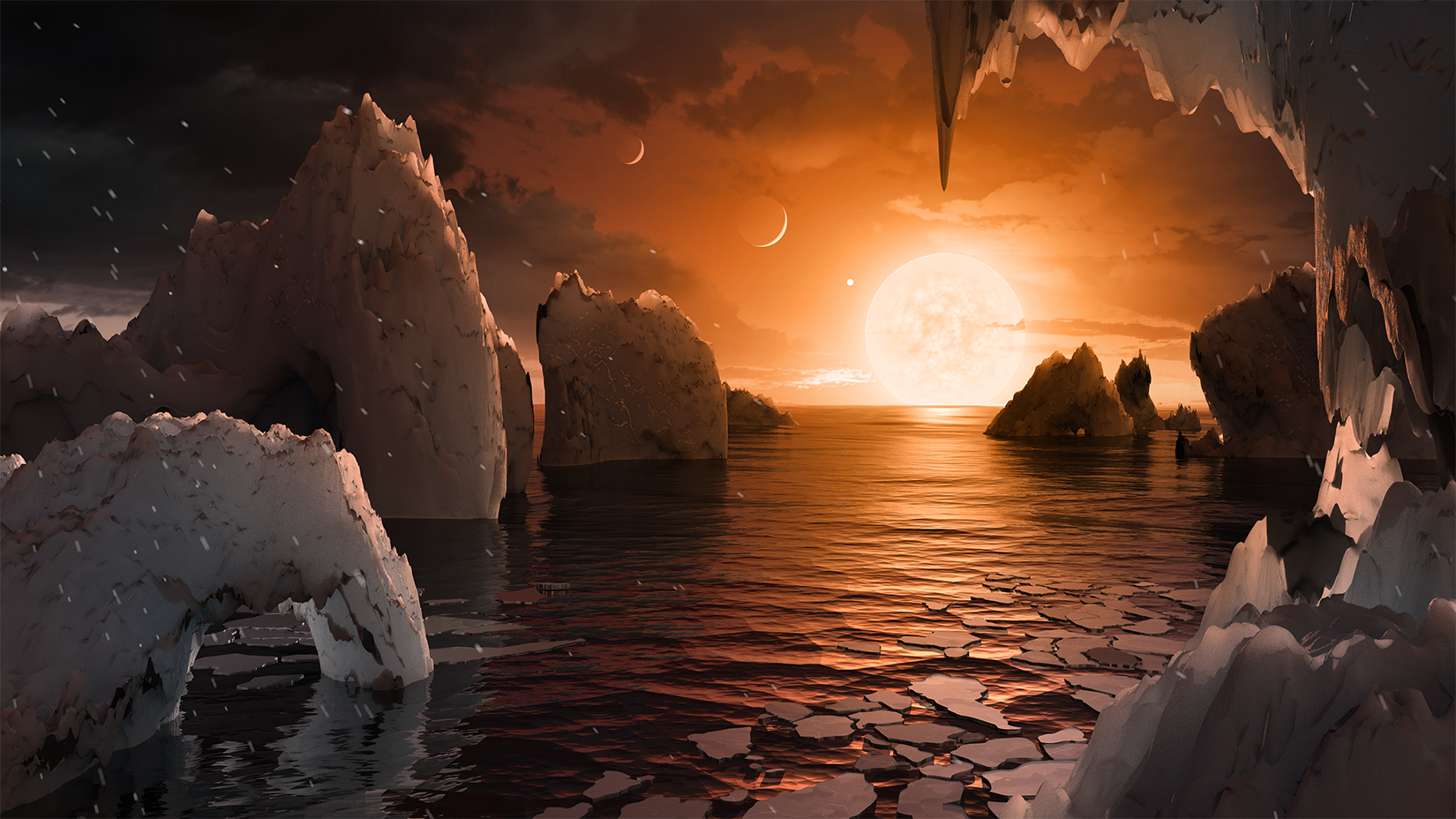 Imagine standing on the surface of the exoplanet TRAPPIST-1f. This artist’s concept is one interpretation of what it could look like.

Webb should also help astronomers understand objects much closer to home, such as planetary systems surrounding nearby stars. Because infrared telescopes can bypass the gas and dust that typically block visible light, they’re perfect for studying such systems; the telescope may even give astronomers a glimpse of young star systems as they’re forming. Thanks to the Kepler space telescope and the more recent Transiting Exoplanet Survey Satellite (TESS) mission, nearly 5,000 exoplanets are known to exist. Webb is now poised to take a close look at some of the more interesting cases.

One early target will be the system of planets circling a red dwarf star known as TRAPPIST-1, located some 40 light-years from Earth. The system contains seven roughly Earth-sized planets, the largest number of such planets discovered in any stellar system. Most exciting of all, data from Webb may yield information about the atmospheres of alien worlds — a key piece of information in the effort to understand whether life might have taken hold on other worlds beyond our Solar System.

“The ultimate question is, are these planets conducive to life? And for that, you really need to study their atmospheres,” said René Doyon, an astrophysicist at Université de Montréal’s Institute for Research on Exoplanets. “We already do this to some extent with Hubble, but Webb will be far superior in terms of sensitivity.”

One of the key instruments on board Webb, designed for exactly this purpose, is the Canadian-built Near-Infrared Imager and Slitless Spectrograph (NIRISS), an instrument that will capture images as well as spectra of distant objects in infrared light.

Using a technique known as “transit spectroscopy,” NIRISS will be able to track changes in a planet’s spectrum as it transits its parent star, and from this, astronomers can infer the chemical makeup of the planet’s atmosphere. Doyon and his colleagues will use data from Webb and NIRISS to search for signs of water, carbon dioxide, methane and other chemicals associated with life.

“Once we detect an atmosphere, the next question will be, ‘OK, what’s in that atmosphere?’ And if we detect water there, that will be a major discovery.”

One particularly intriguing planet, dubbed the “hell planet” in media reports, is a world known as K2-141b, located some 200 light-years from Earth. The planet is tidally locked to its star, meaning that the same side is always facing the star, just as one side of the Moon always faces Earth; this means one side of the planet is much hotter than the other.

“This planet is so hot on the day side and so close to its host star that you can expect a magma pool or magma ocean on one side,” said Lisa Dang, a graduate student at McGill University who has been studying this unusual system. “It’s so hot that you can get evaporation from this ocean, and maybe even a rock-vapour atmosphere.” As strange as this “hell planet” is, Dang said that studying it should help tell “a bigger story of how planets form, and how that relates to the planets in our Solar System.”

Is it worth it?

Webb is too big, too complex and too costly — its price tag is currently estimated at US $10 billion — for any one country to do it alone. The project has the joint support of NASA, the Canadian Space Agency and the European Space Agency. In all, more than 1,000 scientists and engineers from at least 17 countries are working together to make the telescope a reality. For Canada’s part, aside from NIRISS, Canucks also played a key role in the manufacture of the telescope’s Fine Guidance Sensor (FGS), which will allow it to keep steady as it aims at particular targets.

And while astronomers have a long list of discoveries they’re expecting Webb to make, the most interesting findings may very well come as a surprise.

“Really, what I’m looking forward to is something unexpected — something that I have
no idea is coming,” Willott said. “And I think there’s going to be a lot of that, even in the first year. It’s going to be a really exciting time.”

Some scientists have stated that the observatory currently known as the James Webb Space Telescope should be given a new name. Proponents of the name change have argued that James Webb, who headed NASA from 1961 to 1968, may have supported anti-LGBTQ+ discrimination in the United States federal government. Four astronomers argued the case in an op-ed in Scientific American in March, and a petition calling for a name change had 1,250 signatures in July. NASA is currently conducting its own internal investigation.

At the time that Webb’s career was beginning in the 1940s, gay and lesbian employees were being systematically removed from their posts in government agencies. Records in the United States National

Archives “clearly show that Webb planned and participated in meetings during which he handed over homophobic material,” the authors state in their op-ed. “There is no record of him choosing to stand up for the humanity of those being persecuted.”

As the authors told the journal Nature in July: “We felt that we should take a public stand on naming such an important facility after someone whose values were so questionable. It’s time for NASA to stand up and be on the right side of history.”

This article was first published in the November/December 2021 issue of SkyNews.

Bits of asteroid Bennu will parachute back to Earth from space later this year, on Sept. 24, 2023.

McGill University and the Université de Montréal, both based in Québec, are among the beneficiaries of recent space grants — including in exoplanets.

“We used those antennas to track and measure Artemis on its way to the Moon by listening to their spaceship transmissions,” said Michel Doyon.

The spacecraft will provide much-needed data on changes in our lakes and coastlines.