If you live at a mid-northerly latitude, the coming week will provide the prime window of opportunity to see the best-performing comet of 2021 – if you don’t mind rising before dawn!

The comet, named C/2021 A1 (Leonard), was discovered by G. J. Leonard at the Mount Lemmon Observatory near Tuscon, AZ on January 3, 2021. When it was discovered near the handle of the Big Dipper, the comet was 5 AU (or 750 million kilometres) from the Sun. After Comet Leonard’s orbit was calculated, astronomers were able to predict that it should brighten enough to see with unaided eyes when it enters the inner Solar System this month.

My advice is to start your attempts to see the comet now! Luckily for us, the Moon will not interfere with our views. This week, the comet should already shine at about magnitude 6, well within reach of binoculars and backyard telescopes, especially from a dark location.

Once you’ve had a look under magnification, try using your unaided eyes. Comet Leonard will rise at about 2 a.m. local time and then climb the eastern sky until dawn. In Canada, and countries with the same mid-northern latitudes, astronomical twilight will begin at about 6 a.m. local time, so the hour between 5 a.m. and 6 a.m. will offer the best combination of dark sky and higher sky position (or altitude).

On Monday, December 6, 2021, the comet will be located a slim palm’s width to the right (or 5.25 degrees to the celestial northeast) of the very bright star Arcturus. That’s close enough for them to share the view in binoculars — but you’ll be better off keeping the bright star out of frame.

Comets move rather quickly compared to the background stars. On each subsequent morning, the comet will descend by several finger widths, dropping farther below (celestial southeast of) Arcturus. On the morning of Wednesday, December 8, 2021, Comet Leonard will pass a fist’s diameter to the right of Corona Borealis’ brightest star Alphecca, and then enter Serpens Cauda (the Serpent’s Head) for Thursday and Friday. Look for Comet Leonard sitting a slim palm’s width to the left of the snake’s brightest star, magnitude 2.6 Unukalhai (or Alpha Serpentis) on Friday.

On the morning of Saturday, December 11, 2021, at around 6:30 a.m, local time could deliver our best views of all. The comet will be about 14 degrees above the eastern horizon, and just above the brighter stars of sideways Ophiuchus (the Serpent Bearer). On Sunday, perigee time, Comet Leonard will sit in central Ophiuchus, a few finger widths to the left (or three degrees northeast) of the globular clusters M12 and M10. Start looking soon after the comet rises — at about 6 a.m. local time. 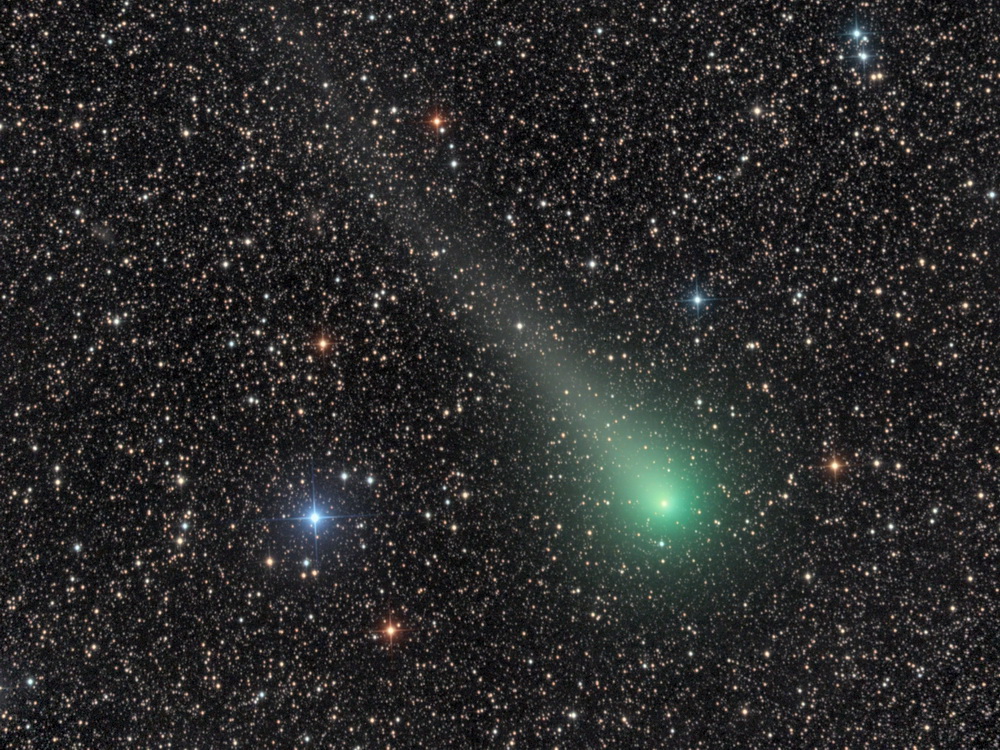 Comets: What they are
and how to see them

The brightest comets are rare, often only visible from Earth for a brief time. How do you catch them?

A few more tips. If your location is dark, the comet should resemble a faint fuzzy patch or unfocused star. Its fainter tail will extend roughly upwards, i.e., pointed away from the horizon. In binoculars or a telescope, look for a faint hint of green. If you use Stellarium or a mobile app, you should update the orbital elements for Solar System objects so that the comet’s position is plotted correctly. Then use the app’s flip buttons to show the same orientation that your telescope produces and find the star patterns that should be surrounding the comet. If you still can’t see it, try tapping the telescope while you are looking. Making a faint fuzzy object “dance” a little will make it more visible.

Comet Leonard will be brightest and largest in the sky when it passes nearest to Earth, or perigee, in the early hours of Sunday, December 12, 2021. Unfortunately, its celestial path will be pulling it closer to the Sun every morning, so on that date, the comet will rise at about 6 a.m. local time in a sky that will already be brightening.

If the comet does brighten sufficiently by then, and the eastern sky is cloud-free, we’ll be able to see it on Sunday for a short time before sunrise. But we’ll also be viewing the comet through a much thicker blanket of Earth’s distorting atmosphere and horizon haze.

On the following morning, Monday, December 13, 2021, the comet will be hidden in the Sun’s glare.

From Tuesday, December 14, 2021, and onwards, Comet Leonard will sit low in the southwestern skyglow after sunset, and then it will travel right to left (or celestial southeastward) above the horizon for several weeks. All the while, it will be steadily receding from Earth and fading, especially after it passes the Sun on January 3, 2022.

(Viewers in the Southern Hemisphere will finally have their own chance to see the comet in evening after Wednesday, December 15, 2021.)

I wish you clear skies and good luck! Let me know if you see it, or photograph it. And feel free to tag me on social media if you post about it, or SkyNews Instagram, Twitter or Facebook.

Chris Vaughan is a science writer, geophysicist, astronomer, planetary scientist and an “outreach RASCal.” He writes Astronomy Skylights, and you can follow him on Twitter at @astrogeoguy. He can also bring his Digital Starlab portable inflatable planetarium to your school or other daytime or evening event. Contact him through AstroGeo.ca to tour the Universe together.

Astronomers and NASA had their eye on 2022 WJ1, a small asteroid on a collision course with Earth.

Meteor showers & comets
Comets: What they are and how to see them

The brightest comets are rare, often only visible from Earth for a brief time. How do you catch them?

If you live at a mid-northerly latitude, the coming week will provide a great opportunity to see Comet Leonard, the best-performing comet of 2021